Neak Pean is one of the temples that make one dream of the olden days of luxury and beauty. It was worth while to the overpowering temples of Siva that men and armies repaired; but it was at the tiny temple of Neak Pean that eager princesses laid their lovely offerings of wrought gold and pungent perfumes.

Prasat Neak Pean is located in the east of Prah Khan, 300 meters (984 feet) from the road. Enter and leave from the north entrance. It was built in second half of the 12th century by king Jayavarman VII, dedicated to Buddhist, with following to Prasat Bayon art style.

Although. Neak Pean is small and a collection of five ponds, it is worth a visit for its unique features. It is believed to have been consecrated to Buddha coning to the glory of Nivana.

The central pond is a replica of Lake Anavatapta in the Himalayas, situated at the top of the universe. The lake gives birth to the four great rivers of the earth. These rivers are represented at Neak Pean by sculpted gargoyles corresponding to the four cardinal points Lake Anavatapta was fed by hot springs and venerated in India for the curative powers of its waters. The orientation of the ponds at Neak Pean ensured that the water was always fresh because the pods received only reflected light.

Neak Pean is a large square man-made pond (70 meters, 230 feet each side) bordered by steps and surrounded by four smaller ponds. A small circular island with a stepped base of seven laterite tiers is in the center of the large square pond. Small elephants sculpted in the round originally stood on the four comers. The central tower was dedicated to Avalokitesvara.

The bodies of two serpents encircle the base of the island and their entwine on… Neak Pean-the last word being pronounced , and the whole name signifies curved Nagas. Neak Pean is one of the temples that makes one dream of the olden days of luxury and beauty. It was worth while to live then and to be a woman among a race which has waver adored its women.

It is to the overpowering temple of Civa that men and armies repaired, but it was at the tiny temple of Neak Pean that eager princesses laid their lovely offerings of wrought gold and pungent perfumes…Fancy it as it was in the old days. To begin with there was the artificial lake, a wide extent of water in the shallows of which floated the flowering lotus.

In its exact center, the surveyors of Angkor were expert stood the exquisite miniature temple of one small chamber, the sanctuary, a temple as finely ornate and as well-proportioned as an alabaster vase.

With art delicious this wonder was made to appear like a vision in the land of faerie. It floated upon a full-opened flower of the lotus, the petal tips curling back to touch the water. On the corolla of the flower curved around the temple’s base, were two Nagas whose tails were twisted together at the back and who raised their fan of heads on either side of the steps in front which mounted to the sanctuary. Thus they guarded the gem and gave gracious welcome to whosoever directed her light barque to draw close to this lovely heaven. On this circular pedestal of poetic imagination rested a square temple with four carved doors, one open occupying all the fasade except for the square columns which flank it.

Above rose the tower with pointed over-door groups of carvings, symbolic, graceful, inspiring Each closed door bore the figure of the humane god Vishnu standing at full height,but lest he impress too strongly his grandeur in this dainty spot, the space about him is filled with minor carving which vary on each door.

Within this lovely casket was a seated stone figure. The door was ever open, suppliants might at any time lay before Buddha their offerings and their prayers.

The chamber was too small to admit them and they stood without in a bending group, swaying toward the Naga-heads for support or salaaming gracious salutations to the god of peaceful meditation. The golden boat floating beside the approach again… Rowers moved the shallop so slowly that the Naga-prow seemed to progress of its own volition. And so, the gods appeased, the spirits rose, and life went happily in the lovely twilight hour…one must know its former state to love it. Neak Pean stands hidden, but it stands in greater perfection than if it had not had not had the enveloping. 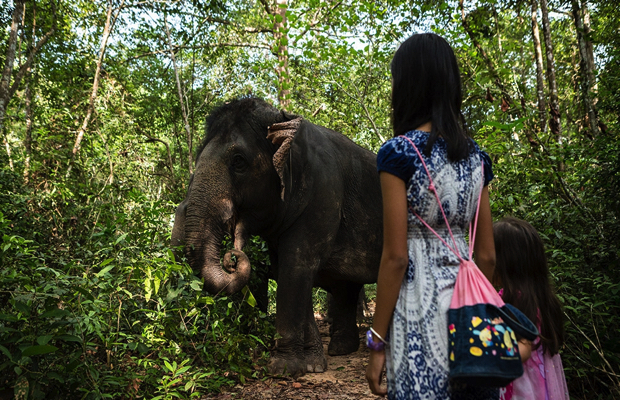 Venture deeper into the Kulen Elephant Forest and be mesmerized by the surrounding nature. Take part in all the ... 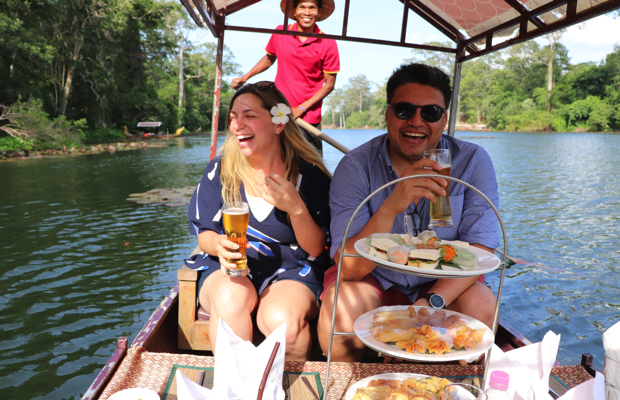 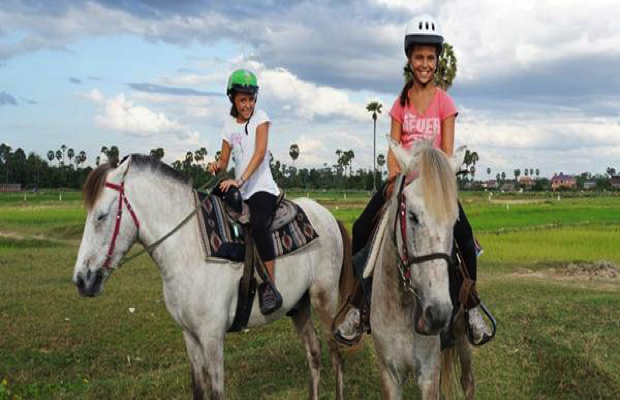 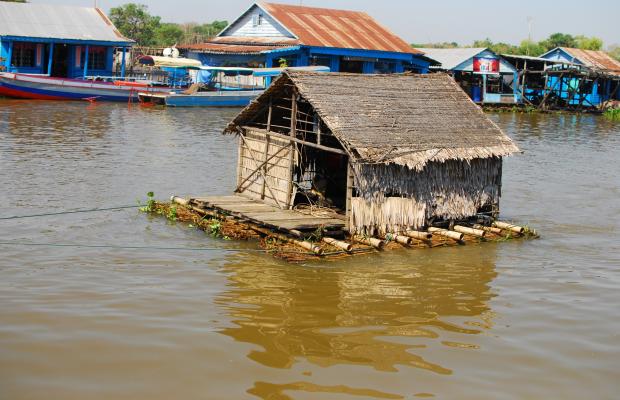